What is Marvis Actions?

Marvis Actions is the proactive method of using Marvis to highlight/bubble up high user-impacting issues across a customer’s organization. This is the next level of our AI capabilities (dpcap, AI driver RRM, VNA etc.), wherein our customers can now experience the beginnings of a self-driving network, along with some driver assist features (requiring user intervention) to systems which Mist doesn’t have access to, which automatically fixes issues affecting end users thereby resulting in on overall enhanced experience while accessing and using Wi-Fi.

Why is it important for customers?

Customers will now not only be able to view high visibility user-impacting issues but will also be able to permit Mist to fix most of the issues automatically as soon as they occur. This will result in significant savings in terms of time and effort in successfully troubleshooting and/or replicating an issue, resolving it and validating that the issue is indeed resolved by the action taken, as all of this will be taken care of by Marvis Actions.

When will it be released and what will it include?

The actions we address are:

How do I use Marvis Actions?

By default, the landing page of Marvis shows the Actions which are to be taken across the organization On the right contains the list of issues which are resolved (or thought to be resolved) in the past 7 days and has 3 categories: For organization wide Missing VLANs, hovering over the APs, switches shows a list for each, while clicking on the sites shows the list of sites. On further clicking the sites in the popup, it redirects the user to the Switches tab for that site 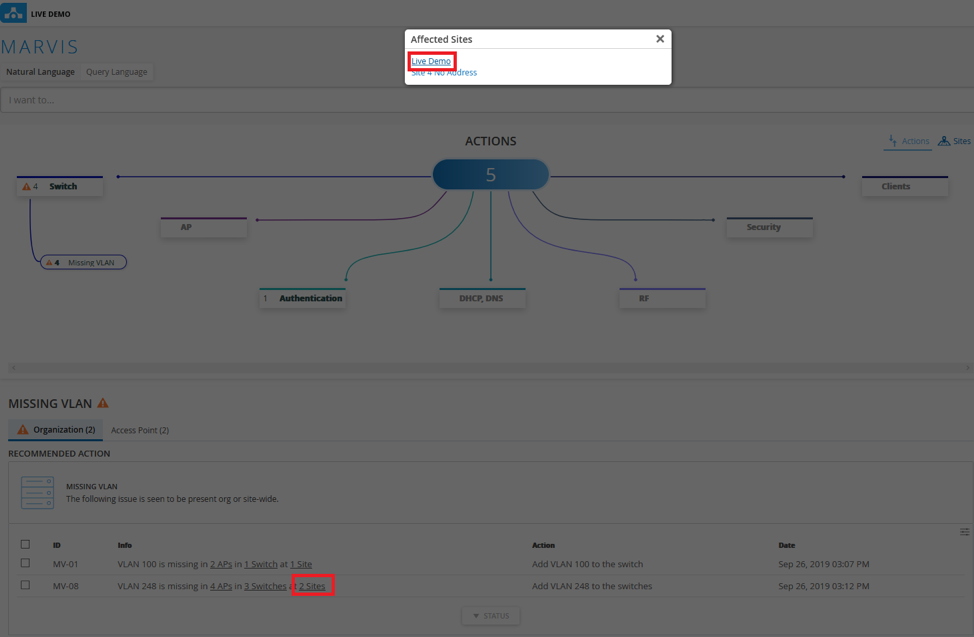 The user can set a status to an issue or a group of issues. When the user resolves an issue, they will be prompted for feedback which will be used by Mist internally to determine the efficacy of the action Finally, the user can view the actions required per site by selecting the Sites tab which will present them with a Google maps view of all their sites with issues