The primary Mist dashboard presents the results of the PACE engine, in the form of Service Level Experience metrics (SLE) Metrics. 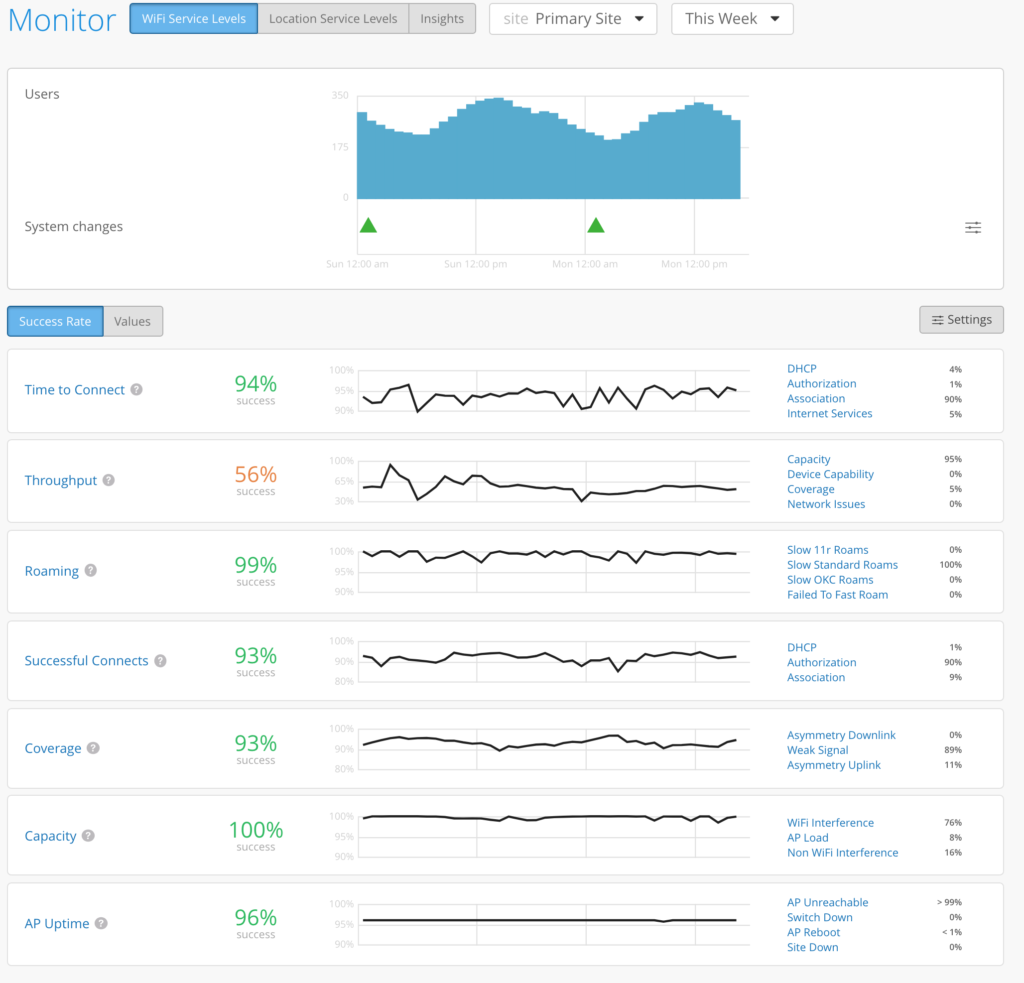 The classifiers for this metric are fired if the time_to_connect exceeds threshold.

If the client fails to connect to the internet, this metric does not count the connection towards the connect-time metric. That is tracked by a separate service level metric. Current implementation has the classifiers divide up the time_to_connect into various buckets.

This SLE metric tracks the amount of time, that a client’s estimated throughput is below the threshold configured by the customer in the graph.

A client’s estimated throughput is defined as the probabilistic throughput given the clients, current wireless conditions. The estimator consider many effects, such as AP bandwidth, load, interference events, the type of wireless device (protocol, number of streams),  signal strength, and wired bandwidth. It is calculated on a per client basis for the whole site. This SLE metric tracks the number of user minutes that a client’s RSSI as measured by the access point is below the threshold configurable by IT. This metric accounts for client activity – if the client is not active, the classifiers are not fired.  The Asymmetry classifiers display bad coverage between the client and the AP. This field is usually displayed in minutes (Number of minutes of bad coverage).  Asymmetry indicates there is a power level mismatch between the client & AP. Since APs are capable of higher power levels than a client, if power levels are set too high, then there is a chance that the low powered client is not heard by the AP, resulting in an asymmetry uplink issue.  Asymmetry measurements are divided into 2 Classifiers: Asymmetry Uplink and Asymmetry Downlink.

In this example, we see that Asymmetry Downlink is zero and Asymmetry Uplink is 29%

The below says the AP was detecting weak signal strength from the clients for 531 minutes.  Out of the 94 users, 39 users were far away from the AP, causing the AP to detect low signal strength. This SLE metric tracks the percentage of successful roams between 2 access points for clients that are within the prescribed thresholds.  The user defines the threshold as a target time it takes for a client to roam.  Fast roaming as defined by 802.11r and OKC are for clients using RADIUS based authentication. The Latency Classifier tracks the delta time between clients roaming across APs. The Sub-classifiers that make up the Latency Classifier should look familiar, as they were all present in the previous iteration of our Roaming SLE. These Sub-classifiers are: Slow OKC Roams, Slow 11r Roams, and Slow Standard Roams. Slow OKC and 11r roams occur when the roam time exceeds 400 ms. Slow standard roams occur when the roam time exceeds two seconds.

The Stability Classifier tracks the consistency of AP choice and 11r usage during client roams. For now, this contains one Sub-classifier: Failed to fast Roam. This classifier is assigned if a fast roam capable user on a fast roam enabled SSID experienced a slow roam that took more than 2 seconds.

The Signal Quality Classifier is all new and tracks the RSSI of clients during a roam event. Here, we have the new Sub-classifiers Suboptimal Roam, and Sticky Client. Suboptimal Roam tracks when clients roam to an AP with more than a 6 dB decrease in RSSI from the previous AP, and if the new association RSSI is worse than the configured coverage SLE threshold (default -72 dBm). Sticky Client tracks when a client remains connected to an AP even when there are more roaming options available to improve the RSSI by more than 6 dB.

This SLE metric tracks the percentage of successful Authorization, Association, DHCP, ARP, and DNS attempts during the initial connection by a client to the network, when a client roams from one AP to the next, and on an on-going basis.

This is the latest SLE. Now, this Metric will be calculated using AP Reboots, AP Unreachable events, and Site Down events.  AP Unreachable is when your AP loses cloud connectivity. This can be due to a WAN issue, or just when the AP is unplugged from the switch.  Site Down events occur when all APs on your site are unreachable.